Create an Account - Increase your productivity, customize your experience, and engage in information you care about.

History of The Armory

Honorable Beginnings
Built in 1921 following a standard design by John James Huddart, the State Armory in Brighton is unique. One of 12 in Colorado using Huddart’s blueprint (and one of only 3 left standing), the Armory was built of 33,000 hydrastone blocks manufactured in Brighton. Upon its dedication and opening in 1922, the building was used to store arms and military equipment, and to serve as the headquarters for Company K, 157th Infantry of the Colorado National Guard. The main floor of the building included a drill hall that could be used as a public auditorium, a kitchen, and a stage. The second floor housed a reception room and dressing room; the basement was used not only for arms storage and curiously, had a swimming pool with dressing rooms for both men and women!

A Colorful Past
When the National Guard transferred to Fort Morgan in 1928, the American Legion moved in, filled the swimming pool, and hosted countless community events and celebrations. United Lumber assumed ownership in 1973, using the site to store lumber.

A Local Treasure
As a catalyst for downtown activity, the Armory is the most important cultural initiative in Brighton’s history. For years, residents had to travel to neighboring cities for cultural entertainment and ask local arts organizations to make do with limited space in schools, churches and civic clubs. The Armory establishes a modern arts venue in the heart of downtown, within walking distance of numerous restaurants.

A New Beginning
Its designation as a local historic landmark by the Brighton Historic Preservation Commission set in motion the Armory’s transformation into a vibrant cultural center. Today, the facility hosts local and regional events and performances. A wide range of theater, dance, music and visual arts programming are offered to children, adults and families. Programming at the Armory dovetails with cultural programs at the Brighton Branch Library next door. The Armory is owned and operated by the Brighton Urban Renewal Authority. 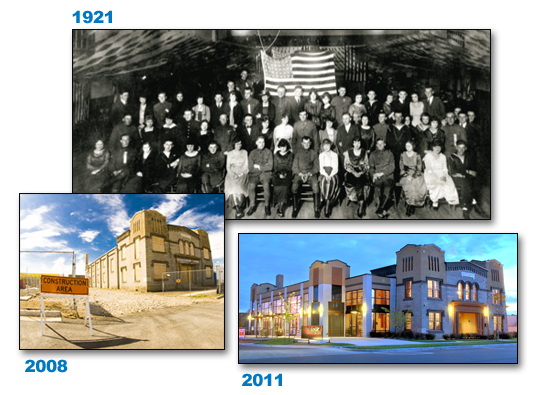